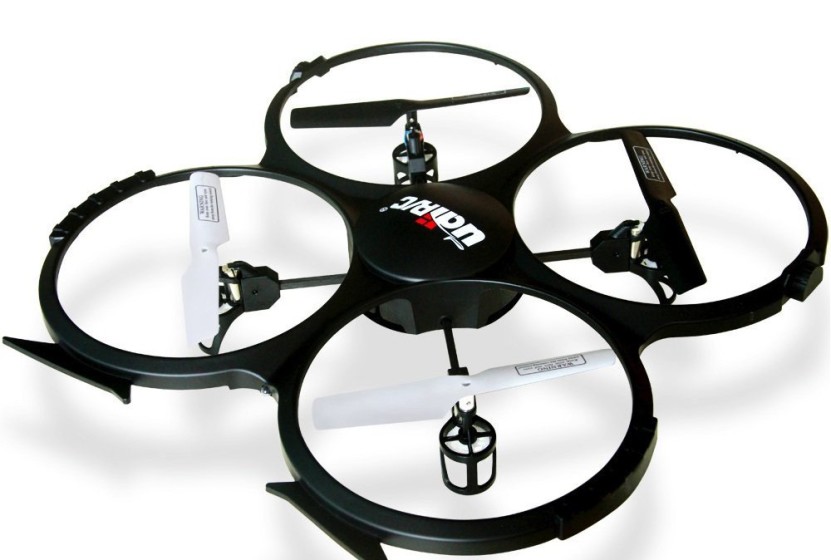 The UDI U818A is a great mild weathered outdoor quadcopter for beginners to start testing the waters with a hobby sized quadcopter that has aerial video and photography features.

The U818A only weighs about a quarter pound, which is pretty light for a quadcopter of this size.  It is well suited for flight both indoors and outdoors, however because of it’s size we’d recommend outdoor flight on mild-weathered days.  Because of its light weight and size, the U818A is a very vulnerable to wind, making it prone to being pushed around easily. Flying it outdoors runs the risk of having it crash into a tree or other obstacle, especially when maneuvering in tight spaces when there’s wind.

On the other hand, because of its weight, the U818A is actually rather durable, handling crashes without a problem.   The light weight allows it to fall from different heights without being overly damaged.  I crashed this quadcopter several times on purpose (and not) and it survived like a champ – just a few nicks and scratches here and there, but the props didn’t break nor did the shell.  It looks like the combination of it’s size and the light weight material make it more durable than most other quadcopters at this size. 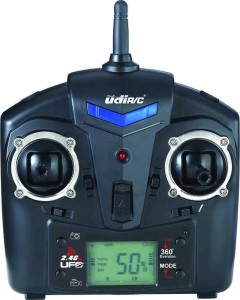 There are three different kinds of trim controls that allow you to refine the movements of the quadcopter.   The on-remote trim switches can be used to dynamically adjust the stability of the quadcopter. You can zero out any slight side slipping or rotation by tweaking the three trim switches this way or that.   Once that’s done, the quadcopter will hover itself quietly over a single location until the next change of wind or joystick input disturbs it.

The quad is light and moves quickly!  Quickly enough that the momentum of it’s movement can quickly move the quadcopter out of range of its transmitter and receiver.  When this happens you’ll start to see intermittent receiving of your direction commands.   The worst is if it’s going in one direction (like into a wall) and you it doesn’t receive a turn command in time.    I found this to be frustrating, crashing into trees and bushes several times while I was testing the quad.  The range is about 3o meters, so make sure you stay within range, otherwise expect it to try to attempt a soft landing (wherever it is).

Once you feel a bit more comfortable flying, there’s a button on the top left that beeps when pressed.   Once pressed you can tap the controls in any direction and it will do a flip however you want.  If that’s too hard or you feel uncomfortable to do it (or just lazy), there’s also a button that allows you to do a 360 degree flip at will.  Either way, when you’re doing flips make sure you have some good height in the air, otherwise you’ll flip your quad right into the ground!

It comes with a decent camera the can take video and pictures (but not at high definition) and are static free and very stable when hovering at altitude. It has a resolution of 640×480 pixels with FPV capability, although the included Micro SD card can hold 1 GB of storage.  This is probably not enough for video, so consider upgrading the card when you get a chance.  The control that is included is a 2.4 GHz 4 channel remote controller that also has an LCD panel display, which displays the  battery life, throttle settings, camera settings.  Although the quadcopter says it handles FPV video through Wi-FI, I couldn’t find an app online to set it up.  It might require a new transmitter, but I decided to not bother with it since flying FPV is still new to me and I didn’t want to crash it anymore!

The U818A won’t do well if you put it up against high-end quadcopters, but as an introductory or budget drone, it is one of the better ones available in its price range and size.  I’d recommend this to people only able to fly outdoors in mild weather and looking to pick up the hobby.   It has just about everything you need to see what it is like to fly a bigger drone that’s geared for aerial photography like the DJI Phantom 2 Vision.  More advanced drones will be able to do what the U818A does even better, but the U818A gives you a good idea of the experience of flying a quad is like.  For a product that can start you off into a fun new hobby, paying around $60 with shipping is quite a deal.  If you see one on sale, or if you have any interest in trying out quadcopters, then pick up a U818A. You will be glad you did.
>> Buy the UDI U818A on Amazon.com for only $59 (while supplies last)<<