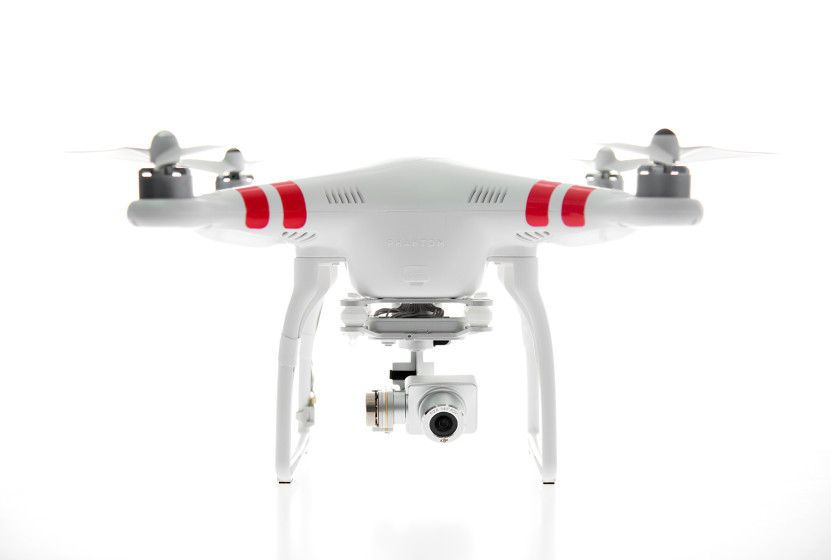 Does it make sense to use a quadcopter for video?

Recently, quadcopters have risen in popularity, due to their aerial range and also the excellent high definition video that is now available for them, being used for everything from real estate to cinematography. In the real estate world, realtors use the quadcopters to get aerial views of properties for sale, giving the buyer even more insight into the property that they are buying.  By having a camera attached to the quadcopter, it gives you the freedom to frame and shoot a video or photo from whatever angle you’d like.  You’re no longer bound by where you can physically move.

Major movie producers are being to see the benefit of using unhindered cameras on mutli-rotor quadcopters as well.  In the past cameras were mounted on rails or a boom system, but the scenes were always relatively contained within a small space.  Anything expanding into greater areas required a larger rail system or a complicated boom system.  With aerial photography, they’re no longer locked into the ground and can circle at will.  Recently the band OK Go leveraged the mobility of a multi rotor copter for their video “I Won’t Let You Down” with outstanding results! 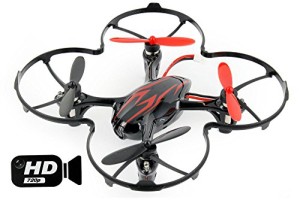 The Hubsan X4 H107C comes with an integrated video camera in either standard definition or high definition.  We’ve written quite a bit about how great the Hubsan X4 H107 line of quadcopters are.  They durable, lightweight, and have great stability even outdoors when there’s light wind.  They’re easy to control for beginners and allows beginners to “take the training wheels off”, by having two modes of operation, beginner and advanced.

The video that comes out is a little shaky, but then again, it is coming off of a micro quadcopter that doesn’t have video stabilization like the DJI Phantom 2 Vision+ has.  Also, for the $60 price tag, it’s a great way to start learning how to fly and to get comfortable flying a quadcopter around.  There’s nothing worse than seeing a $1000 piece of equipment plummet to the ground because of some silly maneuver you shouldn’t have tried.

The Hubsan X4 H107D also has a First Person View configuration, allowing you to see what the camera sees in real time.  It’s definitely more expensive, coming in at about $167, but it gives you the feeling of what it would feel like to actually be inside the quadcopter as it flies through the air.

If you’re a beginner just getting into the hobby, this quadcopter is perfect for you.  It has great reviews on Amazon.com and it’s definitely one of the best micro quadcopters on the market. 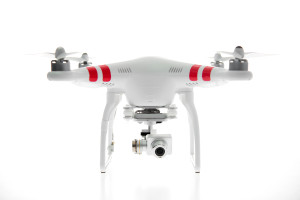 Currently, on the market, the best quadcopter for video for this type of work for the consumer is the DJI Phantom 2 Vision+.  With this quadcopter, there is a built in camera that takes excellent videos and photos. This high quality camera has a removable 4GB micro SD card.  It films HD video at 1080p/30fps and 720p/60fps, giving you a crisp video at a professional standard and the option to film slow motion shots. Still photos are taken at 14 mega pixels. This makes it optimal for both consumers and professionals when choosing a quadcopter.

The DJI Phantom 2 Vision+ isn’t just for high quality video either.  It has flight radar which displays the current position of the Phantom 2 Vision+ in relation to the pilot. The pilot can see what the quadcopter sees (what’s referred to as First Person View or FPV) by using an app that runs on your phone or other device using iOS or Android.   This quadcopter even has a built in safety feature which triggers a “Return to Home” feature if you exceed the control range of the remote control. This means the Phantom 2 Vision+ will automatically fly back to its takeoff point and land safely.
This type of high end technology definitely does not come cheap.  The DJI Phantom 2 Vision+ will cost you around $1200.  However, if you consider the quality of the camera and the hardware required to install FPV and a gimbal, it would actually be around $1200 anyway.  DJI just saves you the time and trouble of installing everything yourself.
This is the perfect quadcopter for someone who’s comfortable with the hobby already, or is willing to make an upfront investment in a device they’ll use for several years.  If you’re a beginner, just fly with caution until you are more comfortable with quadcopter flight. 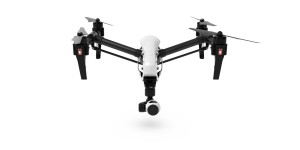 Since technology is always evolving, DJI recently announced a new “Prosumer” quadcopter, the DJI Inspire 1.  This is a professional grade quadcopter that is distortion free, meaning no more fish eye effect, and allows a 360 degree unobstructed tilt views, which is unprecedented in all quadcopter models. You can also shoot up to 4K video and capture 12 mega pixel photos with the Inspire 1 camera. The lens consists of 9 elements in 9 groups including an aspherical element producing extreme clarity, while Adobe DNG RAW support gives you the power to make every shot a winning one.
This quadcopter may evolve aerial video into something that has never been seen before.  The photos being taken with this quadcopter (see our Facebook page or Twitter) are absolutely amazing without any touch ups.  DJI took notes from the problems people were having with their Phantom 2 series.  The Inspire 1 allows two users to fly the device now, one controlling the flight and the other controlling the camera.  In addition, new controls allow the camera operator to manual adjust camera settings on the Inspire 1 such as the ISO settings, white balance, and even exposure.
In addition to a great camera, the Inspire 1 is an extremely stable quadcopter.  With increased motor capacity, the Inspire 1 can stay stable in winds up to 25 – 40 mph.  The max speed is also about 50mph, which makes it one of the fastest ready to fly quadcopters on the market.
All of the features come with a price, $2869.  But this is the ultimate quadcopter for the consumer who wants the best consumer quadcopter with easy aerial photography controls.  If you want the best high end quadcopter and don’t want to mess around, this quadcopter is the real deal.